>E for Egholm and Edwards

For this week´s alphabet meme I should like to draw attention to a Danish crime writer, Elsebeth Egholm.

Unfortunately, her very fine series about the journalist Dicte Svendsen has not been translated into English yet. They are published in Germany, Holland, Norway and Sweden, and I know that she has ´sold the rights´ to an English publisher so hopefully …

Egholm´s debut was a portrait of the 1980s, and she did not consider it a crime novel herself. Many reviewers did, however, and her second book, “Hidden Errors” (called Skjulte fejl og mangler in Danish) is certainly a crime story, and a very fine one indeed. It features the body of a baby, but it is not very graphic.

Since then she has written six novels about Dicte, generally solid books with convincing plots, but lately they have struck me as less convincing as Dicte is always personally involved in the very serious crimes. (Not to the extent of Patricia Cornwell´s Kay Scarpetta, but still).

My second choice is Martin Edwards, the author of the great “Lake District series” with protagonists Hannah Scarlet and Daniel Kind, but also an older series about the Liverpool Lawyer Harry Devlin.

I have read and reviewed “The Coffin Trail”, “The Cipher Garden” and “The Arcenic Labyrinth” earlier this year. 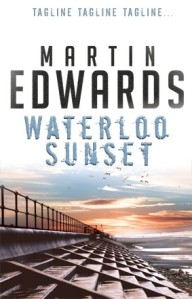 latest in the series).

A teaser from the first page:

“Harry Devlin stared at the announcement of his death.”

Of course you will get a review later, and you can visit Martin´s interesting blog here.

I am a Danish teacher. In my spare time I read, write and review crime fiction.
View all posts by Dorte Hummelshøj Jakobsen →
This entry was posted in ABC meme, Elsebeth Egholm, Martin Edwards. Bookmark the permalink.