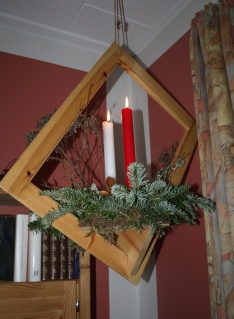 Rhapsody didn´t really have time to solve a murder mystery in between all the Christmas preparations in the large vicarage so she tried her best to leave it to Archie and his colleagues. She was very pleased, though, when he came to ask for her help the next morning.

“I have something I´d like you to take a look at. Forensics have been and gone so you can come in and tell me what you think about her books.” Primrose knew when it was best to call in an expert, and Rhapsody worked as a part-time librarian.

Rhapsody followed him and took her time to study the sagging shelves thoroughly. As she had guessed yesterday they were all romances. Not really Rhapsody´s taste – at least not if anyone asked her.

“But this is crazy! No one does that … unless?” She chose one of the pink paperback backs and pulled at it until she succeeded in wringing it off the shelf. She checked the back flap and when she found a picture of an old, white-haired woman she let out a low whistle. “So she was actually… Darling, our Miss Toffee Brown was really the famous writer Barbara Cartwheel.”

Primrose nodded. “I thought so but I wanted to hear what you said before I ran out and told my superior. This is awful. When the press find out…” He tore at a tuft of his short hair.

“But then we´ll just have to solve the case before they do!” Rhapsody lifted her chin and looked around her, ready to strike down on any clue the police force had not found yet. All she saw was Barbara Cartwheel paperbacks from floor to ceiling. Thousands of them, mostly in garish colours, and many of them were not even in English.

How sad. So Toffee Brown had really come here to get away from the limelight. And now she was dead.

“The neighbours are getting really curious,” Primrose complained. “They march up and down the street all day as if they have all sorts of errands. It´s just a question of time before one of them will call the local rag.”

Rhapsody looked out of Toffee, or rather, Ms Cartwheel´s windows. Agatha Mistletoe was struggling to push Jim Partridge´s wheelchair over a kerbstone. “I´d better offer to help her. Perhaps I can divert their attention a bit.”

“Hello, Mr Partridge and Miss Mistletoe,” she began while she took charge of one of the handles of the chair. “But where is your sweet cat? I have hardly ever seen you without Kitty.”

“We´ve had to keep her indoors since yesterday,” Agatha Mistletoe snapped. “With that ferocious dog at large poor Kitty has been frightfully upset.”

“Eh, you mean Tweedledee?” Rhapsody didn´t know what to say as her goal had been to keep their minds off the murder of Ms Cartwheel.

“Awful brute,” Jim Partridge grumbled, and Rhapsody had a feeling he didn´t refer to the dog only. She stared at a black leather shoe that stuck out underneath the warm coverlet which covered Partridge´s useless legs.

“Pardon me, but I just remembered something.” She ran back to the cottage and grabbed Primrose´s uniform sleeve. “I´m sure I have found your murderer. You must come with me immediately!”

They caught up with the wheelchair right in front of Partridge´s door.

“Look at those shoes,” Rhapsody exclaimed. “See those salt stains on the leather.”

For a moment, Partridge seemed to forget that he could not see. Swiftly, he adjusted the coverlet so the stained leather was invisible.

“Get down!” Rhapsody wailed.

Agatha Mistletoe raised a heavy frying pan and let it crash down where Primrose´s head had been a split second earlier. The pan continued its trajectory and hit Partridge´s right shoulder. He jumped out of the chair, bellowing like a wounded bear.

“Oh, no. Poor James.” Miss Mistletoe broke down, weeping inconsolably. “I knew it would go wrong.”

“And now you´d better explain what this is all about.” Primrose had not quite forgotten that the nurse had tried to bash his head in as he pushed them both ahead of him into Partridge´s house.

Jim Partridge had turned so white that Rhapsody feared he would faint. His right arm hung down, and she suspected it was broken.

“If you´ll call a doctor, I promise I´ll tell you everything.” He sank down on a sofa, wincing when his arm touched the seat.

“You see, I am here incognito. My real name is James Prattlesome. The thriller writer?” He was vain enough to check that they had recognized his name before he went on. “Somehow, the daft goose in there must have been able to hear us through the wall.”

“It´s too late now, Agatha.” He smiled bravely. “The other night at Sir Bellini´s party she as good as told everybody who I was. I sort of lost it and went over there and killed her before she could tell the press that it was my dear, old nanny, Agatha, who wrote all my bestsellers. Nanny has a wonderful imagination. She began by making up the most horrid nursery rhymes for me, and later her stories sort of developed into those scary novels all my fans love so much.”

“Oh, James. And now the whole world will know that I have switched from my cosy puzzles to those gory thrillers.”

I am a Danish teacher. In my spare time I read, write and review crime fiction.
View all posts by Dorte Hummelshøj Jakobsen →
This entry was posted in Christmas, flash fiction, Gershwin & Penrose. Bookmark the permalink.