>Alan Bradley, The Sweetness at the Bottom of the Pie (2009) 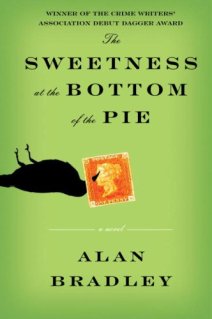 This debut is written by a Canadian but set in Britain in the 1950s.

On the very first page eleven-year-old Flavia de Luce has been gagged, tied and locked up in the attic. Fortunately only by her older sisters Daphne and Octavia. With the mother dead and the father an unobservant philatelist, the daughters are left to solve their conflicts on their own.

Soon, however, a very real enemy from outside the family leaves a dead snipe with a one-penny stamp on the doorstep. Flavia, who is not beyond listening at doors, learns that her father is involved in a thirty-year-old mystery that involves a very rare stamp and a death.  The following morning she finds a dying man among their cucumbers, and when Inspector Hewitt botches up the case, it is up to Flavia to solve the mystery with the aid of faithful Gladys, her mother´s old bicycle.

Despite her young age, Flavia is an excellent chemist who also shows great detecting skills. She has taken over the old lab in the Georgian family home, Buckshaw – a setting which slowly comes to life together with Flavia who seems to know the place better than anyone else.

“Like an inchworm, I wiggled my way up onto my knees, but it was too late.”

This ubiquitous inchworm is a rather unusual amateur detective; a lonely, precocious protagonist who struggles hard to be the son she believes her father wanted.

I bought the Kindle version myself and my one-word judgement: wonderful!

I am a Danish teacher. In my spare time I read, write and review crime fiction.
View all posts by Dorte Hummelshøj Jakobsen →
This entry was posted in 2011 Global Reading Challenge, Alan Bradley, Canadian, debut, review, review 2011. Bookmark the permalink.

1 Response to >Alan Bradley, The Sweetness at the Bottom of the Pie (2009)