For several reasons, it has been difficult for me to plan my writing life and my publications the last year or so. 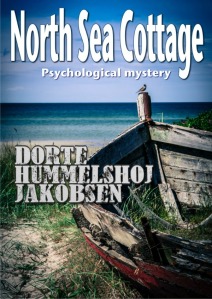 So though I sent out two short stories in April, I am ready to publish my first English novella soon. North Sea Cottage is a psychological mystery of 27,000 words – the story of Tora Skammelsen who moves into a remote cottage in Thy (my corner of the world) to get away from it all and write her next book.

Tora struggled with the rusty key until the lock finally yielded. The trick was to lift the blue door a bit, Faster Bergtora had said. Inside there was a close and musty smell, but opening windows in the dense sea fog did not make much sense. It snuggled so close up to her that she felt like turning around to see what had brushed her neck.

Her stomach growled as she lugged her suitcase inside from the car. The trip had taken longer than she expected because of the poor visibility. Good that she had thought to bring food so she wouldn’t have to dart around, looking for the local all-night shop.

She switched the power on and plugged in the refrigerator. Her modest stock took up most of the yellowed box, which woke up with a sonorous bellow. Everything looked clean and tidy except for a few shrivelled flies curling up on the windowsills.

It took her less than twenty minutes to install all her worldly goods in the minimalistic fisherman’s cottage. This is your life, Tora, she said to herself, before sinking down on a ladder-back chair by the kitchen table. She had even managed to put a genuine whistling kettle on the gas cooker.

She had always thought it was a really nice kitchen. Full of the rustic nostalgia architects let you pay through the nose for these days. Just a pity that Faster Bergtora had put that cheap lino on the floor. She bet there was an original timber floor underneath the ugly, orange flowers, just ready to sand back. Old people were so scared of draughts, but in Tora’s opinion it would have been a much better solution to have seventy millimetres of mineral wool put under the floor.

She had nothing else to do in order to survive for now so her fingers began to fish the cigarettes out of her bag. It was either a smoke or a good cry, and the smoke seemed less defeatist. The first drag made her dizzy, and her throat contracted in a violent bout of nausea. Still, it felt insanely good as the nicotine fizzled around in the extreme corners of her hungering brain.

Several hours later she pulled herself together to creep into bed. An old-fashioned pinewood double bed in white paint. Not a huge example, but still it seemed far too large for one person. She shook a white pill out on her palm. It looked miserable and lonely, and she tilted the bottle again. She had to sleep on an old seaweed mattress, after all. At least it felt that way.

Why did it have to be so damn dark out here? Unaffected by Tora’s state of mind, the fridge and the North Sea had a roaring match while she curled up and pulled the duvet over her head to hide from the penetrating darkness.

If you should be interested in a review copy, please send me an e-mail. dortehummelshoj (at) gmail.com

I am a Danish teacher. In my spare time I read, write and review crime fiction.
View all posts by Dorte Hummelshøj Jakobsen →
This entry was posted in North Sea Cottage, publication. Bookmark the permalink.