A psychological mystery, set in Scandinavia.

Tired of thrillers? If you are a discerning crime-fiction reader who loves searching for the subtle drama between the lines, this one is for you.

This is the story of a young Danish woman, whose life is in a rut. Anna Storm is unemployed, her father is seriously ill, and her best friend and neighbour receives mysterious threats. Anna is a very ordinary antihero, so even when her friend dies unexpectedly, she keeps burying her head in the sand.

Then she finds her Swedish grandmother’s old notesbooks, however. Anna is spellbound by the beautiful drawings and the sweet story of her grandmother’s everyday life. Finally, she has found a worthy project to engage in. As she reads her grandmother’s family chronicles, it dawns on her that the books are not suitable for children at all, but that the sinister story which is hidden between the lines may give Anna a much needed push. Anna wakes up – but is it too late?

I found this an engrossing and challenging read. It’s challenging both in the complexity and in the subject matter.
Anna wants to investigate her family history, but there has always been a mystery concerning her grandmother. It’s only when her father is dying that she is given notebooks containing drawings and text recorded by her grandmother when she was a young girl.
The account of Anna’s modern life is interspersed with extracts from the notebooks and a chilling similarity emerges; both are living in an atmosphere permeated with violence, sexual deviancy and death. Although separated by a hundred years, and living in times of very different social attitudes, there is a common theme of families hiding guilty secrets – secrets that lead to violent death.
The writing is very accomplished. The extracts from the journal cover a period of years and that is clearly shown as the writing of the girl develops from the cheery, chatty style of the young girl (with crossings-out in place) to the frightened tension of the under-threat twelve-year-old.
There are descriptive passages so beautiful that they demand to be re-read and savoured.
Set mainly in Denmark, the names of the characters, the locations, the social attitudes and the use of English combine to create a Scandinavian feel that is tangible on every page. Kindle opens the book at the prologue, but before that there is a glossary containing the Danish words used in the text for which there is no direct English translation.
This wasn’t a relaxing read. I felt that it was making demands of me, but those demands were very well repaid. 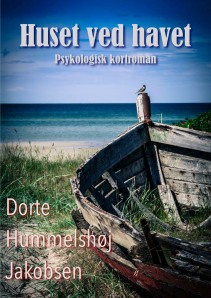 A novella, set near the Danish coast.